The History of the Forest of Selwood

The original name for the area we call Forest of Selwood comes from the Anglo-Saxon ‘Sealhwudu’ or Sallow Wood. The Anglo-Saxon chronicles tell us that Sealhwudu stretched from north of Frome down to Shaftesbury and from Bruton to Warminster. The governing elite recognised this area as a nationally important place for hunting. It was one of a few other great hunting forests at the time such as Scirwudu (Sherwood Forest), Hwicciwudu (Forest of Wychwood) and Eardene (Forest of Arden) – places rich in legend and lore.
Further confirmation of the specialness of Selwood comes from Asser’s ‘Life of Alfred’ – “In the seventh week after Easter, [Alfred] rode to the stone of Egbert, which is in the eastern part of the wood, which is called Selwood, which means in Latin Silva Magna, the Great Wood, but in British Coit-mawr.” 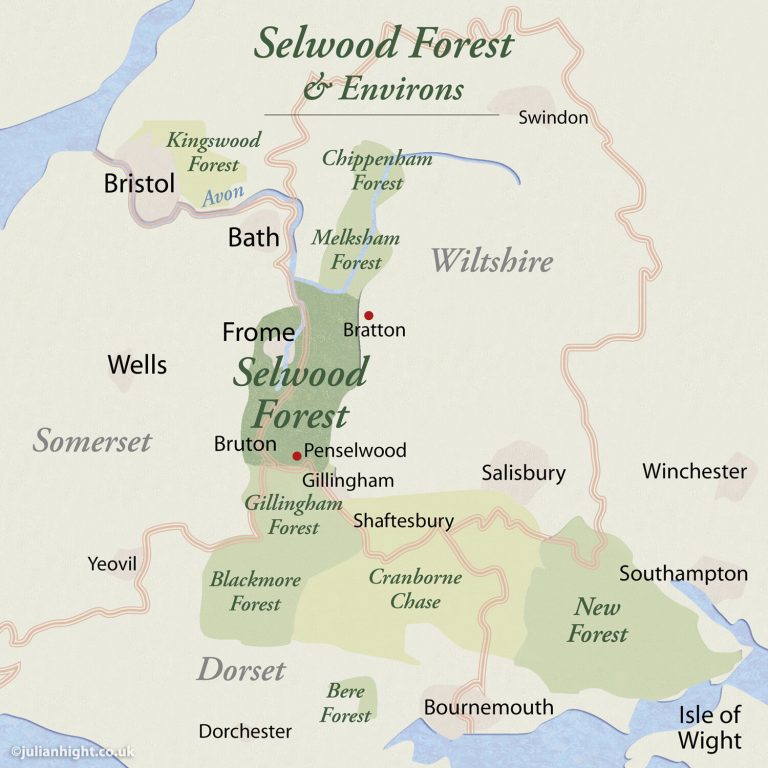 William the Conqueror brought Forest Law with him from the continent. Derived from the Latin foris, meaning outside, Forests were any areas of land outside the village or town envelope and its associated cultivated land and were claimed by the conquering King. To the Norman Kings, Forests were ‘..wild woody grounds and fruitful pastures, privileged for wild beasts, and fowls of forest, chase and warren, to rest and abide in, in the safe protection of the king, for his pleasure.” The habitats needed to favour the ‘wild beasts and fowls’ were open lawns (or deer launds) or pasture, heathland or moorland, marsh and bog, scattered open-grown trees, patches of scrub and small groves of trees. A landscape that perhaps most closely fits this today is that of the New Forest and is nowadays distinguished as wood-pasture and a priority habitat. The Norman Kings applied Forest Law very strongly, particularly in relation to the venis, or venison and the vert, usually winter fodder such as holly and ivy and major mast producing trees especially open-grown oaks.

Michael McGarvie’s ‘Bounds of Selwood’ depicts the physical bounds of the Royal Forest in five perambulations made between 1217 and 1305. The legal extent of the Forest was constantly changing; the boundary was ‘a moveable feast’ that waxed and waned and reflected the changes in the balance of power between the King and landowners. Right up to Elizabethan times the extent of the Forest of Selwood can be seen marked on maps such as the one produced by Saxton in 1587. The iconography of this map shows clearly the open-grown character of the trees in the area. The Forest of Selwood was ‘disafforested’ in 1630 and the land became privately owned. Over the centuries, agricultural and forestry intensification have removed many of the features of the original ‘wudu’.

Our understanding of what forests or woods would have looked like in past millennia is rather limited and nowadays is strongly influenced by early ecologists such as Tansley and Clements and their theory of linear succession of plants, such that open land over time turns into closed canopy forest or woodland of ever more shade tolerant trees. This theory is disputed these days. In contrast, the Dutch ecologist, Frans Vera, in his book on Forest History and Grazing Ecology, proposed an alternative – cyclic succession driven by large herbivores creating an open, treed, mosaic, wood-pasture landscape comprising all the habitats that we value today – pasture, scrub, scattered open-grown trees and groves of trees.
It is the aim of the Forest of Selwood CIC that the area should become richer in wildlife by encouraging all the elements of a wood pasture i.e., all habitats, to address the biodiversity crisis as well as to be enjoyed by the community as a whole.

FOREST OF SELWOOD GALLERY
Back to About Us